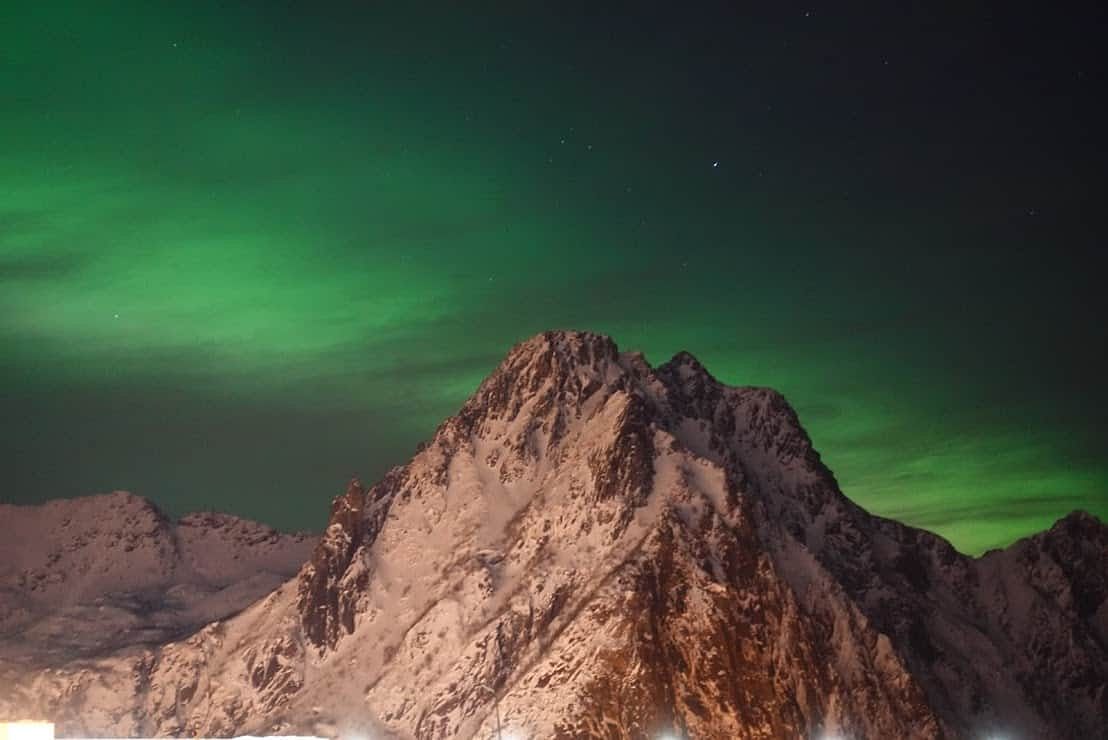 Watching Aurora has been on my bucket list since few years back. But the thought of having to embrace the tough coldness always put us on hold. It’s bizarre to think of watching aurora with kids while having to stand the unusual extreme weather of -20C or -40C.

I don’t think I could stand the extreme weather either.

But to my surprise, eventually our family got to see the Aurora together in the warmth of our cabin hotel and Airbnb. Not under -20C, not even -10C. Unbelievable, right?

Well, let me share with you about the place named Lofoten, the magical destination where we met our first stunning Aurora.

Lofoten is an archipelago in Norway. It is situated above the Arctic Circle but surprisingly it is warmer than Oslo. This group of islands is draped by the Norwegian Sea. So I guess the sea’s current warmed up Lofoten and made it a bit warmer.

So far we experienced the coldest temperature at about -13C. Usually it is just around -3C to -1C. This is temperature on early February.

The day we arrived at Lofoten, we spend the night at a cabin hotel named Anker Brygge.

This cabin hotel use the concept of fisherman’s cabin. Which is a cabin house with red color. In our house there were 2 rooms each with toilet, a cosy living room with TV, a complete kitchen with dishwasher, fridge, microwave oven and cutleries and more.

We were so excited and hopeful but we also did not put much expectations, just so we don’t want to be too frustrated.

Upon returning from having meal at a restaurant, Maryam, our 5-years old insisted to play with snow outside our cabin. So my husband prep the kids and look after them, while at the same time he can look up any sign of Aurora at the sky.

The kids play happily outside with piles of snow. They swim in the snow, dunk into the snow even play snow angel together.

Glimpse of Aurora While The Kids Playing Snow

Suddenly my husband texted, ‘a sight of Aurora is coming’

What? I cannot believe it? Is it for real?

But I didn’t ask.

Quickly I jumped out of the bed with our 8-months baby Hajar, putting on some cover and went out. Baby Hajar was already sleepy. She’s cuddling with me in the baby carrier.

I saw my husband by the dock trying to set-up the camera.

I asked him, where is it? Well I can see white thing on the sky. Is that it? Or is that just a cloud?

Oh my God. I can’t believe it! I almost shed my tears at this unbelievable sight.

Just right outside in not so cold weather, while my kids are playing with pile of snow, in not so remote place, not total darkness and while I am baby carrying my sleeping baby Hajar; we met our first Aurora!

I still can’t believe it.

Eventually the girls are getting tired and asked to get inside the home to sleep. So my husband and I had to take turn, one of us get to watch the Aurora while the other one put the girls to sleep. 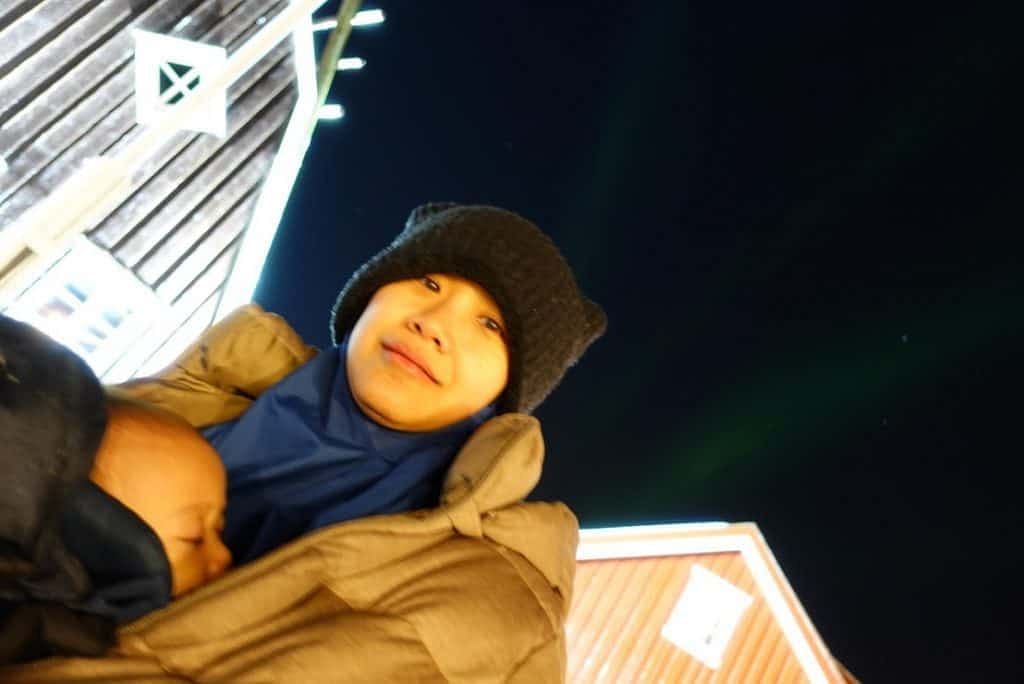 One with our 8-months baby Hajar who is sleeping soundly in the baby carrier.

The awe-inspiring Aurora danced quite for some time until suddenly we saw a stripe of very bright green and purple Aurora coming from right side of the mountain.

Whoa! Those were very bright even to our naked eyes.

My jaw dropped as I hastily grab the camera to take it’s picture.

I still can’t believe it until today.

Watching Aurora with kids and baby is not impossible anymore.

No we don’t have to brace the extreme coldness.

No we don’t have to hunt for them.

The Aurora light will come to you and your kids when the sky is clear and the stars are bright.

Just come over to Lofoten at the north of Norway and get to Anker Brygge cabin hotel. Insya-Allah you will find the Aurora.

P.s : You can read our full, genuine and not-sponsored review about Anker Brygge cabin hotel. We love it so much that we want to share it with the world! 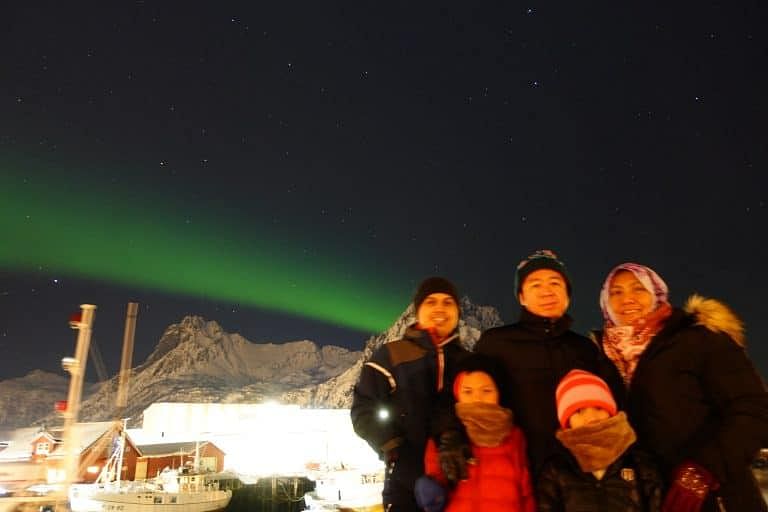 No, we don’t do aurora hunting when we have our kids and baby. It’s just too bizarre to imagine. But, hold your horses peeps! That doesn’t mean just because we are parents with kids and a baby, we have to dump our bucket list. Do you know that having our kids and baby make aurora… 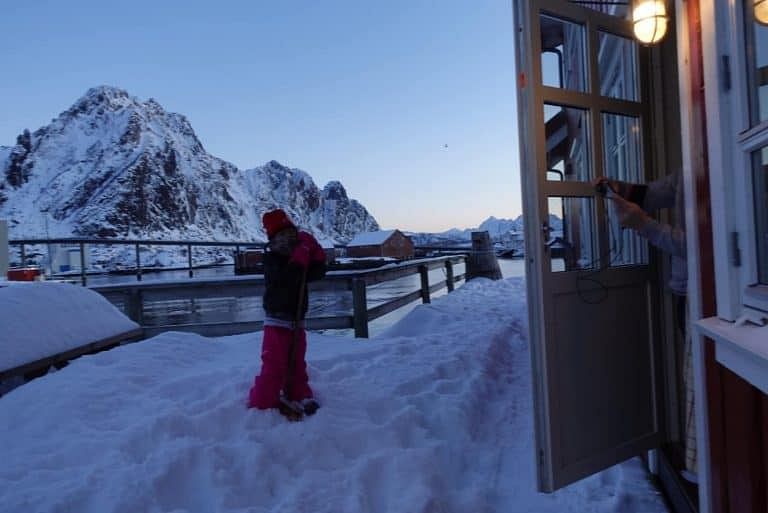 At the sight of the view of the cabin hotel, our weariness from long hours flight and handling the kids’ tantrums, all disperse into thin air. What an amazing place! The mountain, the snow and the sea all blended perfectly into one picturesque view. I could stand all day looking at the view if not…

0 shares
We use cookies to ensure that we give you the best experience on our website. If you continue to use this site we will assume that you are happy with it.OkPrivacy policy